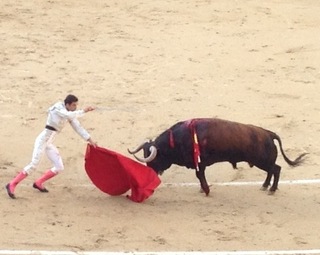 Landing in Madrid amidst an afternoon thunderstorm reminded me of the musical lyric, “The rain in Spain stays mainly on the plain.” This trip marked my fourth time returning to the Iberian Peninsula since I first stepped foot on it as a high school student in the summer of 1998.

It felt invigorating to once again be in the bustling metropolitan capital, with its ancient plazas, ornate fountains, and elaborate stone monuments at each intersection. Keeping in pace with an ever-advancing globalized world, Madrid boasted capitalist enterprises like Starbucks, McDonalds, Burger King, and TGI Fridays at every corner. Yet there was something starkly different about this culture from the rest of the civilized world.

Smack dab in the city’s center, occupying a large piece of expensive real estate, a stadium exists solely for La Corrida de Toros—the uniquely Spanish tradition of bull fighting. This gladiatorial arena seemed out of place. Surely this busy neighborhood packed with modern cars, fashion stores, and outdoor cafes was constructed in the wrong location, perhaps even in the wrong era. While people went about their hectic lives, did they realize that the ancient diversion of bull fighting still continued here?

I asked the locals and received mixed opinions. Many Spaniards told me they don’t promote this barbaric activity because of the bull’s suffering. Yet others praised it as Spanish heritage, and claimed this was a legitimate money-making business that would continue forever. They explained in greater detail that each matador (bull fighter) is a career artist and has a fan following.

I observed groups of tourists and Spaniards running around purchasing tickets from street vendors. I eagerly purchased mine for 25 Euros ($30.00 USD) and walked inside the arena. My ticket assigned me to level 7, row 12, seat 21. When I arrived at the right concourse, a closed door prevented my entrance. An older Spanish man weathered by a lifetime of too much sun spoke. “You can’t enter until after the first bull fight finishes,” he instructed. This reminded me how much the Spanish respect this ritual.

Fortunately, an old television hanging from the hallway’s ceiling broadcasted the remaining minutes of the current performance. I watched as two English students standing next to me openly discussed the failing Euro. All of a sudden, the enraged bull knocked the matador to the ground and used his horns to attack him not once, not twice, but three times as the matador’s assistants rushed to the center to divert the animal’s attention from the injured bull fighter! I couldn’t see the crowd from my position in the poorly-lit hallway, but I heard their roar increase with feelings of excitement and nervousness from the surprising turn of events.

The matador, stained with fresh blood, stumbled to his feet. He tried to walk normally, but it was obvious the massive bull hurt him. Strangely, I sensed the matador’s pride was hurt even more. Spanish men are part of a machisimo society, and that emotion is magnified by matadors. They parade their glittering trajes de luz (suits of light) like peacocks trying to attract mates.

The rattled matador walked to his nearby mozo de espadas (sword page) and retrieved his sword before returning to the center of the arena. He and the bull faced each other in an intense standoff. The anticipation was palpable.

He then thrust his steel into the bull’s nape of the neck as the crowd shouted olé. The beast wobbled for a few seconds and then collapsed onto the dirt. Before the dust settled, the large wooden door swung open and I ascended the stairs to my row while listening to the sounds of the crowd jeering and applauding. A live band played and the drums pulsated throughout the arena. Spanish flags waved in the wind, symbolizing hundreds of years of Spanish pride, tradition, and culture. All of this pageantry helped me experience the frenzy that I imagine permeated the Roman coliseum two thousand years ago.

I sat down on a concrete slab painted with the number 21. To my right was a group of American foreign-exchange students from the local university. Behind me sat a tour group of Indians, and to my left were staunch Spanish fans.

I asked the mid-thirties Spanish man to my left, “When was the last time you attended a bull fight?”

“July,” he said. “I come about ten times a year,” before he sipped his can of beer.

The fine aroma of an expensive cigar caught my attention and I looked left. A well-dressed Spanish man is snapping family pictures with his wife and daughter. He teemed with joy as he shared this pastime with his family.

The second bull fight began. The bull was released into the arena and he darted around, unsure of where to go or what to do. Then three of the matador’s assistants, who were dispersed in the arena, waved colorful capes to draw the bull’s attention.

They performed for the crowd for a short time and then two picadors (lancers on horseback) entered the arena. The horse’s size made him an attractive target, and the bull charged with fury. The horse, which was blindfolded and clad with protective padding, plummeted into the wall by the beast’s sheer momentum. Pinned against the railing, the picador jabbed a spear into the bull’s neck muscle to cause a loss of blood and thus weakening.

For the next stage, the matador’s three assistants each planted two sharp barbed sticks into the bull’s shoulder. This further weakened the bull, not to mention agitated and further angered him!

For the third and final stage, the matador assumed the center of attention. He collected his red cape and sword and walked pompously to the middle of the arena. The crowd apparently was not chanting loud enough and the matador gestured with his hands for the crowd to become more enlivened. He required more praise for his bravery.

As the battered bull charged its last hooray, the matador thrust his sword completely into the bull’s shoulder, penetrating the heart’s aorta.

The bull staggered for only a second, and then collapsed onto the dirt—reminiscent of the Old Testament passage, “for dust thou art, and unto dust shalt thou return.” The crowed erupted into applause as two horses galloped into the arena to drag the valiant bull backstage. During this time, workers quickly prepared the arena for the remaining four bull fights.

I had tasted enough of this ritual to feel its effects, yet not be intoxicated. It reminded me of when I studied in Cantabria and our class took a field trip to see a bullfight. I felt indifferent to what I had witnessed, but many of my classmates were appalled at what they watched and voiced their outrage. Our college-aged Spanish chaperones became offended, and quickly defended their national pastime by questioning how Americans could be so bothered by this ritual, when Hollywood produces violent films that attract millions. I had the impression they were close to discussing America’s wars, but they halted.

For me, the answer was quite simple. It had been my experience that Americans could ignore human suffering more easily than the suffering of one animal. I could never imagine an America that would allow a sporting event like this, but I wasn’t in Spain to change their culture or to leave behind mine. I was there to broaden my horizons, and I did.
Hooray! You can be the first to comment.
Loading…}