My Q&A for the James Patterson MasterClass Journey 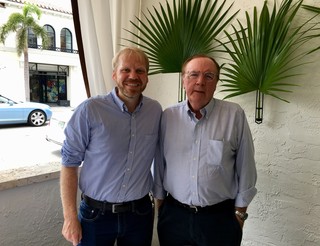 1) How did you hear about the James Patterson MasterClass?
I kept seeing MasterClass ads on my Facebook wall. I forwarded the advertisement to several friends who like writing, and I decided to enroll on January 29, 2017.

2) Have you taken any other MasterClass courses?
I'm a student in Aaron Sorkin's and David Mamet's classes.

3) If you could take a MasterClass from anyone, who would it be?
Retired FBI Special Agent John Douglas, the legendary profiler. Douglas exposed himself to the flames of evil so that our world could be safer. I enjoyed his books: Mind Hunter, The Anatomy of Motive, Journey into Darkness, and Law & Disorder.

4) What made you enter the co-author competition?
I see James Patterson's books everywhere. Come to think of it, the only place I haven't seen his books for sale were in the villages of Papua New Guinea. Perhaps there is a limit to his global influence, after all. His co-author competition presented the right amount of opportunity and challenge to motivate me. I'm humbled and blessed to have won.

5) To what extent did you research JP's style and adapt your own style for the submission?
Coincidentally, my style of writing is already very similar to his. I prefer short chapters, moving the story along quickly, ending each chapter on a cliffhanger, and I enjoy writing about adventures that involve danger, criminals, and investigators.

6) How did you come up with your book proposal?
In 2016, I was working in Goa, India. American sailors told me Goa was the equivalent of Miami's beaches in Florida. Despite my 20/15 vision, I couldn't see the comparison. I felt like I was completely off the radar there. When I was riding the bus to the airport one morning, the idea for my international thriller came to me. More importantly than the idea, was the emotion I felt. I'm going to try my best to relay that emotion for you in this novel.

7) What was the first line in your chapter submission?
"How many times had he seen this?"

8) How did you find out you were in the Top 10, and then Top 3?
I was working in Hong Kong and received an email from MasterClass asking if I would be available for a Skype call the following morning. I gave my Skype contact info and woke up at 4:30 the next morning (because of the time difference) to learn from Brad and Molly that I was in the Top 10. It was exciting news!

I was at my house in Japan when I received a call from Brad letting me know that I was in the Top 3. It was fantastic news, but also stressful. The pressure was on because I had only written about ten chapters in my novel and I was told I needed to submit an outline within three weeks in order to continue competing. I knew how I wanted my novel to start and end, but I didn't yet know how I was going to fill in chapters 11-79.

9) How detailed was the outline you submitted once you made it to the Top 3?
I followed the MasterClass guideline. The outline had to be between 25-30 pages, and each chapter summary could not exceed 150 words. Once submitted, James Patterson reviewed them and provided me feedback in the form of 6 bullet points. The three of us had less than a week to update and resubmit our outlines.

10) What do you think put you over the top? A solid hook, a strong outline, following JP's style, etc?
The contest was very competitive because so many of the MasterClass students are talented writers. I thank and also congratulate the semi-finalists: Tammy Vaughter and Mari Yates, for keeping the competition so tough.

In order to win the contest and have the opportunity to co-author a book with James Patterson, everything had to be excellent. I revised my book hook about five times, my chapter submission about ten times, and my outline about 20 times before I submitted them. Then two or three days before James Patterson was to announce the winner, MasterClass unexpectedly reached out to me and said James Patterson wanted to see two sample chapters from each semi-finalist. I had two days to create two new chapters to submit.

11) What’s the most important thing you’ve learned from James Patterson’s MasterClass?
His style of outlining was the greatest technique I learned. After I started outlining, I ended up getting rid of some of the chapters I had previously written before taking his MasterClass. Creating an outline first, instead of writing chapters, is a timesaver.

The second most important thing I learned was a reminder of how common rejection is. James said his first novel was turned down by 31 publishers! He could have become demoralized and quit, but he didn’t. Instead of becoming bitter, rejection motivates me to become better.

12) What’s your favorite book?
Aspire: Discovering your Purpose through the Power of Words by Kevin Hall. It left a strong impression on me. Kevin shares my love for the English language and for etymology. My second favorite book is The 15 Invaluable Laws of Growth by John C. Maxwell. Everyone should have the goal of trying to reach their potential.

13) Do you have any favorite books on the art or craft of writing which you feel have guided you in honing your writing skills?
I listened to Stephen King narrate his book, On Writing, while I was on a roadtrip from Singapore to Malaysia. It felt like he was sitting next to me. I highly recommend the audiobook version.

14) Who has been the most supportive of your writing?
Me. And YOU should be the most supportive of YOUR writing. Writing takes bravery, and that is something that must be cultivated from within. I also benefit from the support of my wonderful wife, and several of my close friends who provide constructive feedback.

15) How was the phone call telling you that you were going to write with James Patterson?
I was working in Washington, D.C. when MasterClass asked if I would be available to take a phone call at 1100 AM the following day. Unfortunately, I wasn't able to. I was working in a building that prohibited cell phones. So, I asked if I could take the call after 4:15 PM. I was sitting in my rental car when Brad sent me a text to standby for a call. When I answered the call, I heard, "Hey Tucker. This is James Patterson. You won!" It was a complete surprise. For one, I didn't know if I was going to be the winner, and I also didn't think James Patterson would be the one calling. He congratulated me and told me how tough the competition was. He said he reviewed about 30 or so submissions. The phone call lasted about 10 minutes and it was like talking to an old friend. We talked about where I was from, where I was living, how I earned my pay, and some of his books that I had read.

Tucker, appreciate all the wonderful information you have shared. I'm so excited for you and the rest of your journey, as well as "the book." Wishing you the best, friend!

Thanks, Tucker for writing this. intriguing to hear what the process is from the selectee's point of view. I was the one who asked about books you'd used to hone your craft. Loved King's book too. I've always been a 'discovery' writer, but James' course has helped immensely with outlining. Great course.
All the best for your writing with James Patterson. I sense you're in for quite the ride! LOL.

Tucker, this was a great thing for you to share with us. Thanks. I, too, am a huge fan of John Douglas. That man is a genius. I'm excited to read your book and, someday, join you on the bestseller list. Congrats again!