An Angel Returns Home: The Story of my Great Grandmother, Isabel 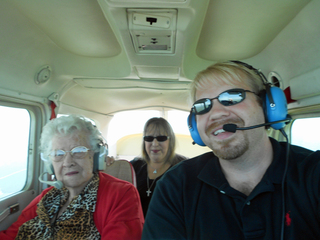 My great-grandmother, Isabel Axum, whom we affectionately called "Memaw," would have celebrated her 104th birthday this November had the Lord not called her back home last Thursday, June 20, 2019. Her extraordinary life touched so many others, and everyone who came across her path has their own wonderful and unique story about her kindness and sense of humor, but here's mine:

She was born in East Texas in 1915. The Choctaw and Chickasaw Indians had called that wooded area Tiyuk Hekia ("Standing Pine"), but it became known as Overton and the first post office was instituted in 1873. Soon after her birth, her family loaded the covered wagon and made their way to Palestine, where she had lived ever since.

Years ago, I made a video recording of me interviewing Memaw as she sat in her favorite chair in her living room. She was never one to run the air conditioning. She said: "the AC makes people sick."

She heartily laughed as she recalled her earliest childhood memory. She was four years old. "I climbed up on my mother's safe to find me some paper sacks to roll me up a cigarette. But instead of getting paper bags, I pulled the safe over and the dining table caught it, but it didn't keep it from breaking all the dishes and me getting a good whipping by my mother."

She told me the story of her first job, which was at Knox Glass Company in 1943. "I made about thirty-five cents an hour. You had to work two weeks before you got a check. So, I went to work at the wrong time for the check date. I worked three weeks before I could get my first check. My first check was for ninety-six hours, and two days of that was time and a half and my check was forty-three dollars and a few cents. I still have the stub."

After her husband, Tucker Axum, passed away in 1965, Isabel began working in the lunchroom in the high school for the Westwood Independent School District. For 18 years she could be seen walking across Hwy 79 and the school's campus because she had never gotten her driver's license. She had never even learned how to drive. She retired from Westwood at the age of 68.

Isabel was no stranger to fame--having been nationally published in Plane and Pilot Magazine when she, at the age of 95, courageously wanted to fly around Angelina County (Lufkin, TX) with her great-grandson in a Cessna 172 aircraft. I took her and my Aunt Mary flying. While we were cruising around East Texas, I pulled out a digital camera and took a selfie of us. But it wasn't very clear because of the turbulence, and I was having difficulty getting all three of us in the picture. I took two more pictures, and Memaw calmly said: "It's probably best you quit taking photos and get back to flying." I smiled and replied, "Nothing to worry about, Memaw. There's nothing to hit up here. It's all air."

She also provided important information and was recognized for her contributions in the adventure novel about her brother-in-law, Mage Axum, who was killed-in-action in Germany while serving in World War II. She remarked how happy she was when the war was over because it meant her husband would not have to fight overseas.

I called her often as I traveled the world, and she always had the best memory. She knew where Heidi and I were, and what we were up to. During one of my calls with her, I was complaining about my job. She listened for about five seconds before she interrupted me and said: "Son, you better just be glad you got a job!" Her tone quickly reminded me of her experience growing up in the Great Depression and through World War II.

When I asked how the world is different today than when she was growing up, she laughed. She said, "When I was a child, we didn't have no electricity, no natural gas, no washing machines, no electric appliances. We had no indoor plumbing. When I was growing up, we had our own milk, butter, chicken, and eggs, and we killed hogs in the wintertime. Nowadays you go to the store and buy all that."

She told me the story of how she was bitten by a snake and a neighbor warned her that she had to get the poison out of her blood. He instructed her to chew some tobacco and swallow it. She said she threw up over and over, and to this day couldn't stomach the thought of chewing tobacco.

She took great pride in performing her civic duties and even received a summons to be a juror when she was 99 years old! She enjoyed Bingo and casually mentioned that she won $500.00 at a game not too long ago. But her true joy came from playing games of Domino 42 on her electronic tablet.

As she looked back over a century of living in East Texas at her 100th birthday party, she told me: "I'm thankful for my life. And I'm happy I was raised like I was. I think I learned a lot growing up like I was."

Memaw outlived her husband by 54 years, and never remarried. She buried three of her four children, and two of her grand children. Her simple yet remarkable life was a testament to hard work, persistence, and making this great-grandson feel special when he'd visit and there would be freshly-baked peanut butter cookies on the stove.

You may read her obituary here.

I greatly enjoyed meeting her and was amazed at her energy and positive outlook. She will be missed.

I grew up with your aunt Lisa I have many many memories of your wonderful Memaw.
She always made everyone feel at home . I enjoyed reading your story and she will be truly missed

She was a precious lady!! Loved by all!

Miz Belle was one of my mother's best friends. When they got to where they could no longer visit, they would spend time on the phone catching up on the latest "gossip". My mother was legally blind and Mrs Axum would read her the newspaper (mostly the obits about which one of their friends had passed away). She was such a sweet lady.

Mrs. Axum has been a friend and neighbor to my family since the early 1960s, when we moved to Westwood. We lived on the same little street. To say she was amazing is definitely an understatement. A hard worker, faithful parishioner at Sacred Heart Catholic Church, lunchroom lady at Westwood, she spoke with wit and wisdom, and most of all, kindness. She focused her energy on the well-being of others, not on herself. It is hard to think of a better model for Christian living than Belle Axum. Rest in peace, Mrs. Axum. Rest in peace.

Great story....great life. She left an imprint on us all.

This is a wonderful write up. Your Great Grandmother seemed like she lived a full life, may she Rest In Peace.

An amazing story and an amazing woman. Prayers for you and your family.