An Evening with John Edward 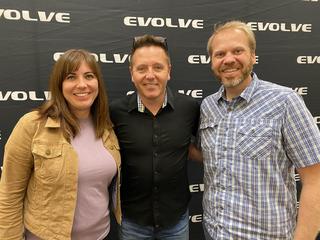 Have you ever met a medium? Heidi and I recently had the opportunity to attend a live event by internationally-acclaimed psychic medium, John Edward. He's charismatic, down-to-earth, kind, and certainly has a special gift. He caught my attention as soon as he said: "Death is the deal we're given the day we're born, but we never talk about it."

John Edward reiterated that death is normal, and then he spent the next hour or so connecting people in the audience with their loves ones on the other side. There were tears, laughter, and even some family secrets that came out. One lady was there with her teenage son. Her departed husband came through and mentioned the lady's first husband! The son had no idea his mother had been married before. The mom said it was a secret.

Here's what else John had to say:

- Nothing is worse than the loss of a child. He took a Q&A from the audience, and one of the guests asked about grieving.  I'll never forget his response. He said grieving is normal, but just like eating, it's not healthy when done in excess.

- The departed have no interest in their earthly belongings after they've left the physical world.

- We all have the room to co-exist on this planet. Put humanity first.

- Life is a classroom.

- John said he has no time for cynicism, but that he encourages skepticism.

- The 2nd year of grief/loss is the hardest. That's because there are less cards, phone calls, memorials, etc. to help you get through it with the support of others.